Cyc Boston is back!

Our doors are open, Boston! The studio is still located at the Park Plaza, but some changes have been made to the check-in process due to the closing of David Barton Gym.

When you arrive for class, you must check in with a Cyc staff member at the upper vestibule,
who will be there 30 minutes prior to class.

We have full access to the lockers rooms– including showers stocked with soaps and towels.
If you use the lockers, please remember your code!

We look forward to seeing you on the bike soon.
Please don’t hesitate to call the studio if you have questions!

I have a sad update on the spin studio Cyc Boston.

Sadly, we have been informed this evening by Club Ventures, the owner of DavidBartonGym at Cyc Boston, that the facility will be permanently closed, effective immediately.

We will be following up with additional details this week, but please feel free to contact info@cycfitness.com should you have any questions about your specific account.

We sincerely apologize for any inconvenience this situation may cause, and appreciate your support through this transitional period.

We will see you on the bike soon! 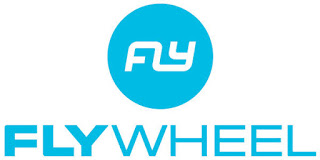 It’s no secret that I used to think spin classes weren’t for me.

Then I discovered Flywheel in Boston.

Their spin classes were so good that they convinced me that not only were spin classes something I could do – I actually enjoyed them!

Flywheel is my favorite spin studio!

On Saturday, I joined some bloggers from Blog & Tweet Boston for a #BlogandFly free class. I brought my friend Maggie with me to try out her first Flywheel spin class.

We both had a great time and a good workout.

The class was lead by Catie Macken. She was encouraging and kept the class up beat.

To  my pleasant surprise, I found out that anyone who brought a friend that was new to Flywheel got a free class – so thanks Maggie for that!

The bikes are arranged in a stadium configuration so seeing the instructor is no problem. Also, you pick the bike you want to ride at check in, so there’s no jostling with other class attendees to get to bikes when the doors open. They also have gel bike seat covers available for free, in case your behind isn’t used to spin/cycling.

The spin equipment at Flywheel is actually comfortable! Spin shoes that clip in are provided as part of the class fee. There is an the electronic board on your bike that showed the resistance level, your Revolutions Per Minute, and how much current you’ve generated. After class, you’re e-mailed your stats, so you can compare your classes to see if you’re improving.

After class, we were treated to salads from Sweetgreen, and they were delicious!

A huge thank you to Flywheel Boston for hosting us!

I’m looking forward to spinning with you again soon!

Here’s what I said about Caroline in my Dunwello review:

I took a spin class with Caroline at Turnstyle and LOVED IT.

Caroline kept the energy level of the class high and everyone seemed to enjoy it. The music was all timed that we should be spinning to he beat.

Caroline made sure to encourage all the riders specifically by name. (Either they’re regulars or she read the seating chart for the class. Either way, I appreciated the personalization!)

Turnstyle uses Real Ryder bikes, which move from side to side unlike traditional spin bikes. So moves in this spin class often incorporated turning & standing sprints had a lot more core work that usual with a rider trying to stay steady as well.

I’d definitely recommend a class with Caroline and look forward to many more!

Thanks to Caroline for inviting me to try her class.

Because the fitness blogger community in the Boston area is a bit of a small family, I saw Caroline later that week at New Balance Girls Night Out Boston. 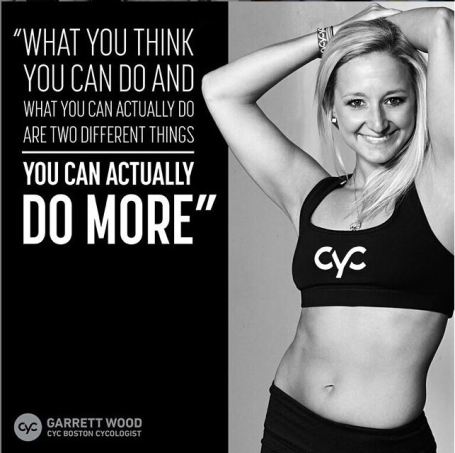 Wednesday night, I had the opportunity to try a free spin class at Boston’s newest cycling studio: Cyc

Cyc is pronounced “psy” – like in psychology. (That’s not how I was pronouncing it, so I looked a little silly. Oops.)

It can be a little bit of a hunt to find the studio the 1st time you visit, so leave yourself some extra time for that. It’s the same address as the Boston Park Plaza and is actually inside the David Barton Gym. (You can use the locker rooms at David Barton gym when you attend a Cyc class.)

What makes Cyc different from other spin classes in the area is the emphasis on arm movements with weights.

To quote their website “the Cyc Method utilizes weighted arm sectors and sport specific movements for more than 60% of the workout.”

The weights are beanbag type, which is different than other studios but I got used to them.

The bikes are no frills, with just the red resistance knob to turn, but no digital displays to tell you what the resistance level is or how many miles you’ve traveled. (I guess Flywheel bikes spoiled me.)

Similar to other studios, there is loud music playing and you’re asked to spin to the beat.

I’m going to chalk this up to the studio being new, but I had major problems hearing the instructor over the music. I’d catch about every 3rd word, so I was very lost most of the class trying to figure out which movements I should be doing or what position my hands should be in on the bike.

The instructor, JB, was great! She checked in with me before class, helped me get set up on the bike, and cheered me on during the class. I know that if the audio problems are fixed so I wasn’t so lost, I’d really enjoy her classes.

I’m definitely going to give them a 2nd chance though and go to another class in the future.

If you live in the Boston area and are interested in trying a class at Cyc, let me know in the comments. I was given some free 1st ride passes that I’d love to share. I’d also be open to scheduling my 2nd class for the same date/time you ride, if you’re interested in that.

If you’ve taken a class at Cyc Boston, let me know what you thought! It’s always great to hear which other instructors classes are worth checking out.

B/Spoke is a new cycling studio in the downtown crossing/south station area of Boston.

I was invited by the owner to take a free “Hot Ride” class lead by Aly Raymer.

It was my 1st time taking a class at B/Spoke so they asked me to come to the class a little early so I could tour the studio.

I was impressed by the studio. They provide free bottled water to all participants. Shoe rentals are included in the cost of a spin class. There are changing rooms and bathrooms (and the changing rooms were pretty spacious compared to other spin studios I’ve taken classes at in the Boston area).

Their lockers have a combination system so you don’t need to bring a lock with you.

So, on to the class!

There is no false advertising! It is HOT! You’ll be sweating for the whole class.

Aly was very motivating. She mixed up instructing from a bike at the front and jumping off to walk through the class, sometimes dancing on the way.

She knew I was new to her class so she checked in with me after class to see how I was feeling.

I forgot how bad my glasses can slip off my face when I’m sweating buckets, but other than that the class was great.

Aly pushed everyone to get to a level that was tough for them.

I enjoyed the class but I think I still prefer traditional spin classes to a hot class.

I was hilarious on my subway ride home though. Downed about 40 oz. of water from my water bottle in 2 minutes.

On Saturday, I had a great time joining my friend Meg’s spin class fundraiser to benefit Autism Speaks. We were once again back at Velo-City!

Meg, in yellow, at the front getting ready to start class.

I enjoyed the class. (I need to come back to one of Meg’s regular spin classes during the week.) 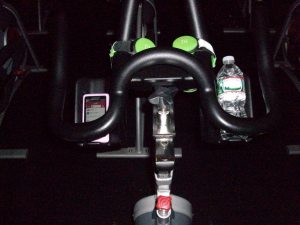 You may remember from last year, Light It Up Neon, that I have a God-son that has Autism. I thought of him a lot during class. I’m wicked proud of Meg for raising $4,000 with her fundraising class!

and got my nails painted with a blue gel polish

If you’d like to donate to this fundraiser you still can!

Saturday afternoon I attended an awesome spin class fundraiser at Pursuit put on by Little Miss Runshine for her Pan Mass Challenge fundraising.

For those of you that aren’t local to MA, Pan Mass Challenge is a huge cycling event and fundraiser for Dana-Farber Cancer Institute.

I’m not good at spinnning while taking a photo, but here’s my bike during class.

All set with my Essentia water! 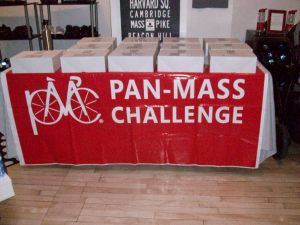 One of my favorite parts of spinning at Pursuit is Bo the dog is always there!

It was a fun class & I’m glad I attended.

At one point, the instructor told us to close our eyes and think of the most bad ass person we know, to channel them to get through a tough set of hills. I thought of Jess L and how she’ll be running the Boston Marathon again in just a few days.

She, and all my friends running the marathon, really rock!

What a difference a week makes!

Last week, the AC in the studio wasn’t working. I felt faint from the heat and left after only 2 songs.

This week, I called ahead to confirm the AC was working & they said it was. Then horrible traffic hit & I was running from my car to make it to class. Just as I was finished adjusting my bike, the lights turned off & class started.

Well, I may have found the secret to feeling like time in a spin class has flown by. Since my body was coming down from “you’re not going to make it” stress, I used the adrenaline to push myself through class. I was surprised when we got to the last song with how well that worked for me! (I’m not trying it again intentionally though. I’m one of those people who likes to be early for everything, so when I run late I seriously stress.)

Here are my stats for the 2 classes:

A bit of a difference compared side by side

I’m still trying to use my pre-paid classes before they expire on March 1st, so I’m signed up for a 7 PM spin class on Monday (2/16). Let me know if you want to join me! Your first class at Flywheel is free, so just call them to reserve a spot.

On January 1st, I started 2015 off right with a 60 minute class at Flywheel in Boston.

The instructor, Catherine, was very motivating. Her playlist of “best songs of 2014” helped me power through when songs that reminded me of November Project played. (Turn Down for What & Uptown Funk)

Here are my stats for the class:

I have a 6 classes pre-paid for Flywheel Boston, so I plan to work in spin classes in my workout routine for early 2015. (The classes expire March 1st.)

I know some of my readers are also Flywheel fans – so let me know if you’d like to attend a class together!

(My schedule works best after 7 PM on weekdays or anytime on weekends.) Depending on the timing, I’d be open to grabbing a bite to eat after.