I am honored to be featured as a “Healthy Chick in the Community” on the Healthy Chicks blog.

Head on over to the Healthy Chicks blog to read the full piece.

Thank you to Rachel for thinking of me!

The theme for October was “closeup”.

I ended up going literal with the theme and just took some closeup photos.

Pumpkins from a Columbus Day Weekend trip to Maine

Wood pile from a Columbus Day Weekend trip to Maine

Potpourri from the lobby of my condo complex

Adorable moose figurine at the cottage we rented in Maine

Readers that followed my winter photo challenge will recognize this one!

What do you think? Did I do OK with the theme this month?

I’m looking forward to seeing what other photo blogging challenge participants posted for their photos.

This monthly photo blogging challenge is facilitated by PJ of the Northeast Bloggers Network.

Thanks for inspiring me to take more photos!

Thanks to Blog & Tweet Boston, I attended a complementary progressive dinner at Bel Ari and Les Zygomates in the South Station/Leather District are of Boston in early October.

Both restaurants are owned by Mark Tosi, President of Pastene Co. (The only tomatoes that my family buys for sauce are always Pastene.) Mark was there to greet us and stayed to intro the meals at both locations. It was a real treat for me to meet him, since my family is loyal fans of Pastene brand products.

Mark and I at Les Zygomates

There were delicious menus just for us offered at both restaurants.

At Bel Ari, I tried both appetizers, Whipped Ricotta with honey, pistachio, sunflower cranberry bread (amazing!), Arancini vand an entree of Shrimp & Lobster Gnocchi. I’d order all the items again! I’d never had ricotta and honey before, so that was a tasty discovery! (I’m a sweet & savory fan.)

At Les Zygomates, I ate the pistachio crusted sea bass and apple Napoleon.

There was a live jazz band playing at Les Zygomates as well, that added to the atmosphere.

Huge thank you to Bel Ari and Les Zygomates for hosting us and Blog & Tweet Boston for organizing the night out!

The October New Balance Girls Night Out Boston is always an emotional one for me.

I didn’t get much time with Auntie Bobbie but I think I get my love of advertising (she lived Mad Men) and the Red Sox from her.

I think of her often and hope she’s proud of me.

This particular workout was MCed by Sherri from Fit Fun Flavor.

The workouts were lead by Kick it by Eliza and Susan Reardon.

Here’s what I said about both workouts in my Dunwello review:

Eliza taught a free kick it session in Copley Square as part of New Balance’s Girls Night Out program on 10/15. I was an attendee and was inspired by Eliza’s energy. We were moving the entire class! Eliza would often leave the stage to stand next to women working out and either hold her hands out for fighters to punch or do the moves right next to the women in the class. It was very motivating. The class seemed appropriate for both newbies and veterans.

Susan was one of the trainers for New Balance Girls Night Out Boston, for the “Kick Breast Cancer” theme. I was really impressed. Even thought this was a free class, she still spent time making sure to teach proper form for the boxing moves we were doing. I felt like I was getting an education in fighting skills along with the workout. In fact, with one of the moves, I had some muscle memory from self-defense training. She also wore a Komen tee shirt and really focused on the theme of the night, reminding us that this workout was in honor of women fighting breast cancer. I’d be very interested in taking a boxing class with her at The Club.

Here’s what I said about Caroline in my Dunwello review:

I took a spin class with Caroline at Turnstyle and LOVED IT.

Caroline kept the energy level of the class high and everyone seemed to enjoy it. The music was all timed that we should be spinning to he beat.

Caroline made sure to encourage all the riders specifically by name. (Either they’re regulars or she read the seating chart for the class. Either way, I appreciated the personalization!)

Turnstyle uses Real Ryder bikes, which move from side to side unlike traditional spin bikes. So moves in this spin class often incorporated turning & standing sprints had a lot more core work that usual with a rider trying to stay steady as well.

I’d definitely recommend a class with Caroline and look forward to many more!

Thanks to Caroline for inviting me to try her class.

Because the fitness blogger community in the Boston area is a bit of a small family, I saw Caroline later that week at New Balance Girls Night Out Boston.

You may have noticed it’s been a little quiet on my blog lately.

I’ve been out of state most of the week staffing a conference for my work. I’ll be catching up on posting this weekend and hope to have some new posts on recent fitness activities up by next week.

While I was away though, I got a lovely surprise!

Last Sunday, I had the wonderful opportunity to join fellow bloggers for CambridgeSide Galleria Fall into Fall Fashion Blogger Cruise.

Here are some of the outfits and accessories they featured:

Thank you to Forever 21 for the gorgeous accessories to take home and enjoy!

I also got to take in some beautiful views of Cambridge and Boston from the Charles River:

Post cruise, Janelle and I headed to CambridgeSide to shop!

We checked out Roster, Francesca’s, and then hit up Cheesecake Factory for a slice to go,

I’ll definitely be back at CambridgeSide soon to get a shopping fix!

Disclosure: I was given free tickets to King Richard’s Faire in exchange for writing a blog post about my experience. Opinions are all my own.

Last Sunday, I went to King Richard’s Faire with my in-laws.

We were excited because it was a Game of Thrones themed day, so we all wore costumes.

I’m taking the photo but I dressed up too.

We spent the day watching the shows (and taking pictures of other guests in character).

I thought this guy had an awesome costume!

He modified his wheelchair to be the Iron Throne!

The 1st show we stopped by was Jacques Ze Whippeur (a funny guy that does whip tricks). I’d recommend seeing Jacques more than once. He changes up his show depending on which stage he’s preforming at. We could hear his whip cracks to music when we were waiting for the joust at the Tournament area.

Then we checked out “The Mud Show” by the Sturdy Beggars. The dialogue was humor that went over kids heads, but the adults enjoyed. Example, naming one side of the audience the Trojans and having their cheer involve “we will never break”. It was juvenile humor when it came to the mud, but overall a fun time.

We wandered around the grounds a bit, seeing the ax throwing booths and some rides (extra $$ to try but fun to watch for free).

The Royal Parade had every staff member in it and an adorable child on a pony that had a unicorn horn! I enjoyed that many staffers dressed up as Game of Thrones characters too and said lines in character during the parade to the faire attendees.

Word to the wise – go to the ATM before you get to the fair. The food is cash only and you need to buy tickets in increments of $5 that are then redeemed for food at the food booths. There is an ATM on site if you forget, but it has a surcharge. Credit cards are useless for food here.

I tried a turkey leg for $11 and it was huge. I couldn’t finish it, but it was tasty. The cheese fries were OK for $5. One of my sister-in-laws said the hot apple cider for $3 was worth it. There are also chicken fingers & cupcakes available, so even picky eaters should be able to find something.

During lunch, we caught some of the Aerial Show, featuring women using silks to preform high off the ground.

After lunch we saw some of the Great Cats of the World Show. It filled up quickly and we couldn’t see much from the back, but we did catch a glimpse of a white tiger and a black panther.

We saw 3 jousting shows on the Tournament Field. Pretty fun to watch!

By then, it was time to get to the King’s Stage to compete in the Game of Thrones trivia and costume contests.

While we were waiting we saw the Mis-Adventurers Swashbuckling Swords & Hilarity and Promises, Prom Misses Musical Comedy finale shows. Both were OK but I’d probably skip “Promises” for my next visit.

My husband, father-in-law, and sister-in-law Jen competed in the Game of Thrones trivia contest and Jen won the whole thing! 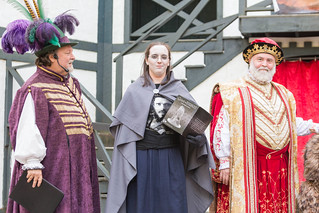 My sister-in-law Jen smiling with her prize

Finally, we saw the Joust to the Death and Evening Revels.

During the Evening Revels 2 cast members got engaged! It was so sweet.

Thank you King Richard’s Faire for a wonderful day of fun! We’ll be back next year.

On Sunday, 9/27, my friend Janelle and I walked 5 miles of the Boston Marathon Jimmy Fund Walk to benefit Dana-Farber Cancer Institute.

and honored at the finish as well

The walk itself is a positive experience though! My in-laws have been participating in this walk since it 1st started 27 years ago. At that time, one of my husband’s cousins was at Dana-Farber fighting cancer as a child. Thanks to Dana-Farber and the Jimmy Fund, he beat cancer and is now “living proof” that treatment works, healthy in his mid 30s.

Here are some views from the last few miles of the route:

Fenway Park is in this section too, and there was a Red Sox game on the day of our walk.

It’s followed by a left on Boylston and the finish line!

Thanks to the walk, my fitbit tracked 12,372 steps for me this day.

I’m very happy to be able to have participated this year and raised $523.60! The money raised through the walk helps support exceptional patient care, as well as the flexible funds that allow future research discoveries to revolutionize cancer treatments both nationally and around the world.

If you would like to support my fundraising, you can donate at: Danielle Kempe Boston Marathon Jimmy Fund Walk funraising page